As humans plan to return to the Moon, their machine counterparts have already been surveying the lunar surface, creating its topography and geological features and shedding light on even the permanently dark regions. The biggest breakthrough, led by India’s Chandrayaan mission, was the discovery of water on the Moon in 2008. Nearly 14 years after the first detection, we now know where this water came from.

It came from Earth.

A new study led by scientists from the University of Alaska Fairbanks Geophysical Institute hints that water on the Moon could be a result of the hydrogen and oxygen ions escaping from Earth’s upper atmosphere and combining on the moon. Led by Gunther Kletetschka of the University of Alaska, the research adds to a vast pool of underway studies to identify the source of water at the moon’s north and south poles.

WATER ON THE MOON

The detection of water reserves on the airless world of the Moon will be of critical use as astronauts from the US, Europe, and China plan to arrive on the surface and build bases to push forward towards Mars. “As NASA’s Artemis team plans to build a base camp on the moon’s south pole, the water ions that originated many eons ago on Earth can be used in the astronauts’ life support system,” Kleletschka said.

The new research estimates that the Moon could be hiding nearly 3,500 cubic kilometers of permafrost or subsurface liquid water created from ions that escaped Earth’s atmosphere. The estimates have been made by taking into consideration the lowest volume of ions escaping Earth and 1 per cent reaching the moon. Hydrogen and oxygen ions are driven into the moon when it passes through the tail of the Earth’s magnetosphere. (Photo: NASA)

Published in the journal Scientific Reports, the study suggests that these unique locations serve as potential resource utilization sites for future landing exploration and habitats.

HOW DOES WATER ESCAPE TO THE MOON?

The research suggests that hydrogen and oxygen ions are driven into the moon when it passes through the tail of the Earth’s magnetosphere, which it does on five days of the moon’s monthly trip around the planet. The magnetosphere is created by Earth’s magnetic field that shields the planet from much of the continual stream of charged solar particles.

Studies led by Nasa and the European Space Agency have already revealed significant numbers of water-forming ions present during the moon’s transit through this part of the magnetosphere. “The presence of the moon in the magnetosphere’s tail, called the magnetotail, temporarily affects some of Earth’s magnetic field lines — those that are broken and which simply trail off into space for many thousands of miles,” the University of Alaska Fairbanks said in a statement. 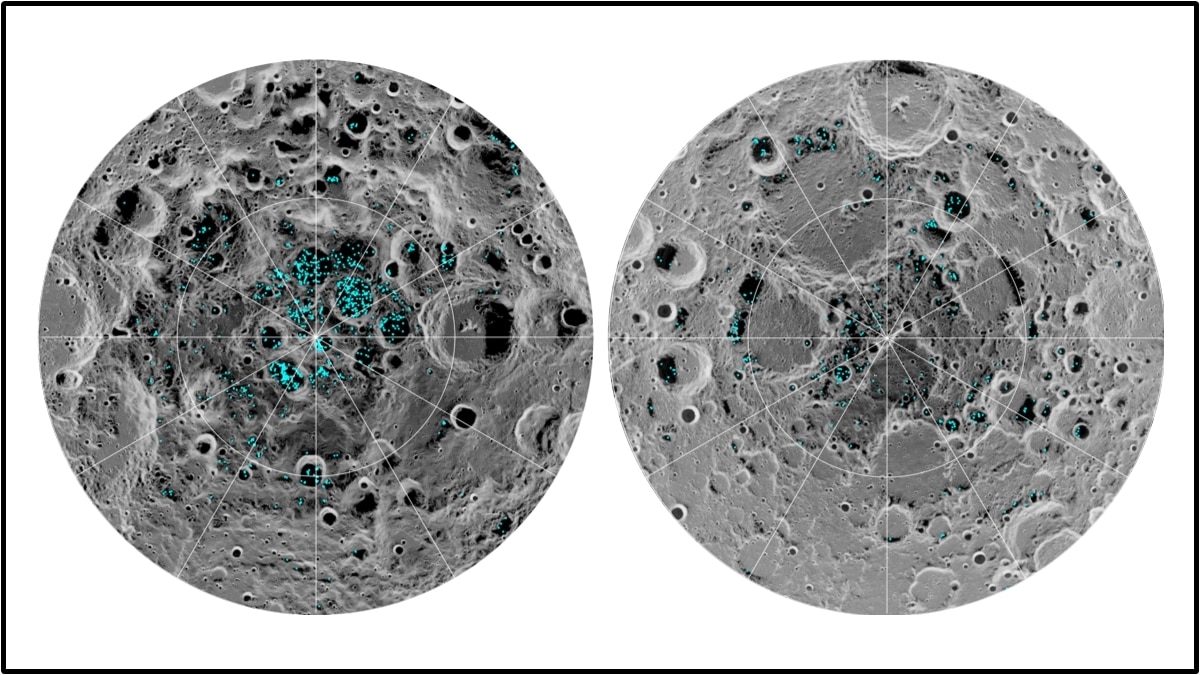 The moon’s presence in the magnetotail causes some of these broken-field lines to reconnect with their opposing broken counterparts. When that happens, hydrogen and oxygen ions that had escaped Earth rush to those reconnected field lines and are accelerated back toward Earth. These passing ions hit the Moon and combine to form the lunar permafrost.

“It is like the moon is in the shower — a shower of water ions coming back to Earth, falling on the moon’s surface,” Kleletschka said.

The findings will pave the way for future research into these permanently frozen regions on the Moon that could unleash the vast reserves of water that could sustain life on the airless lunar surface.