“In the past, no one wanted to come to Heinitang, because the roads were inconvenient and there were no entertainment facilities. Since the establishment of the training base, many young people from neighboring villages have come here with their parents to watch the puppet show, and the village has become very lively.” Zhao Ruxiang, a former secretary of Heinitang Village. A member of the single-person puppet show training base for intangible cultural heritage, Zhao now teaches puppet shows at the base during the day and performs for the masses with other artists at night.

The single-person puppet show in Heinitang Village has a history of nearly 200 years and is a local intangible cultural heritage. In the past two years, while promoting the improvement of the living environment, Heinitang Village has activated its unique traditional culture and built a single-person puppet show training base, which has not only enriched the spiritual lives of villagers, but also injected cultural momentum into the rural vitalization. 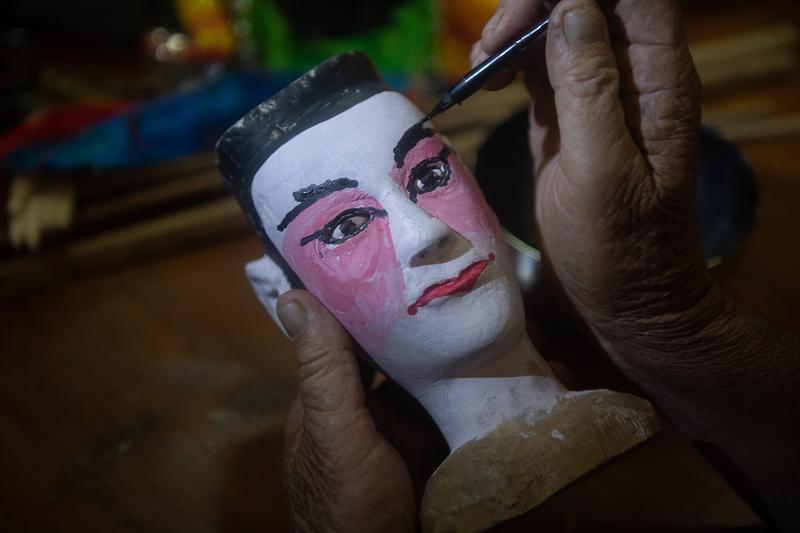 In February 2020, the village also opened a one-person puppet show training class composed of more than a dozen old entertainers, recruiting a group of students. Chen Guojin is a “post-90s” and is 29 years old this year. He is the youngest student in the training class. He usually goes to the base to learn puppetry when he has no furniture installation business.

“When I was a child, I often watched my grandfather and father perform puppet shows, and I fell in love with one-person puppet shows as I got in touch with them,” Chen Guojin said. “I hope to pass on this craft.” Chen also realized that learning the puppet show is no easy task. At the puppet training base, Master Chen Younian corrected Chen Guojin’s operation technique and singing voice over and over again, but Chen Guojin’s patience was gradually exhausted.

Upon coming to the realization that inheritance is not something that can be acquired overnight, Chen Guojin finally picked up the puppet, walked into the stage, and had a gong with Master. Seeing Chen Guojin’s persistence and hard work, people in the village joined the training base one after another to offer advice and suggestions for the innovation and inheritance of puppet show. Recently, they decided to dress the puppets in a modern version of small shirts and perform with cartoon dolls. On the night of the performance, the village was decorated with lanterns to welcome their arrival. “I come to the village to watch the puppet show every day,” said Granny Huang, a local villager in her 60s. “This time they used dolls to sing, and the puppets from the past wore modern clothes. It was quite fun. I will bring my grandson to watch it tomorrow night.”

In the past, puppet shows were limited to major festivals. Today, with the growth and innovation of the Heinitang puppet troupe, the puppet show has become a part of villagers’ daily lives. They watch it together and discuss the inheritance method in the future. “Because of word of mouth, many people know about our team, and sometimes we are invited to perform in other villages, and the songs are also welcomed by the villagers,” Zhao Ruxiang said. “They also said that they would like to hear about the changes in the countryside, so we’ve also recently produced this kind of script.” Zhao said the inheritance of puppet shows has just begun, and old artists are going to combine red culture and non-heritage culture to arrange puppet shows themed on the revolutionary stories of the Red Army and the history of local heroes.