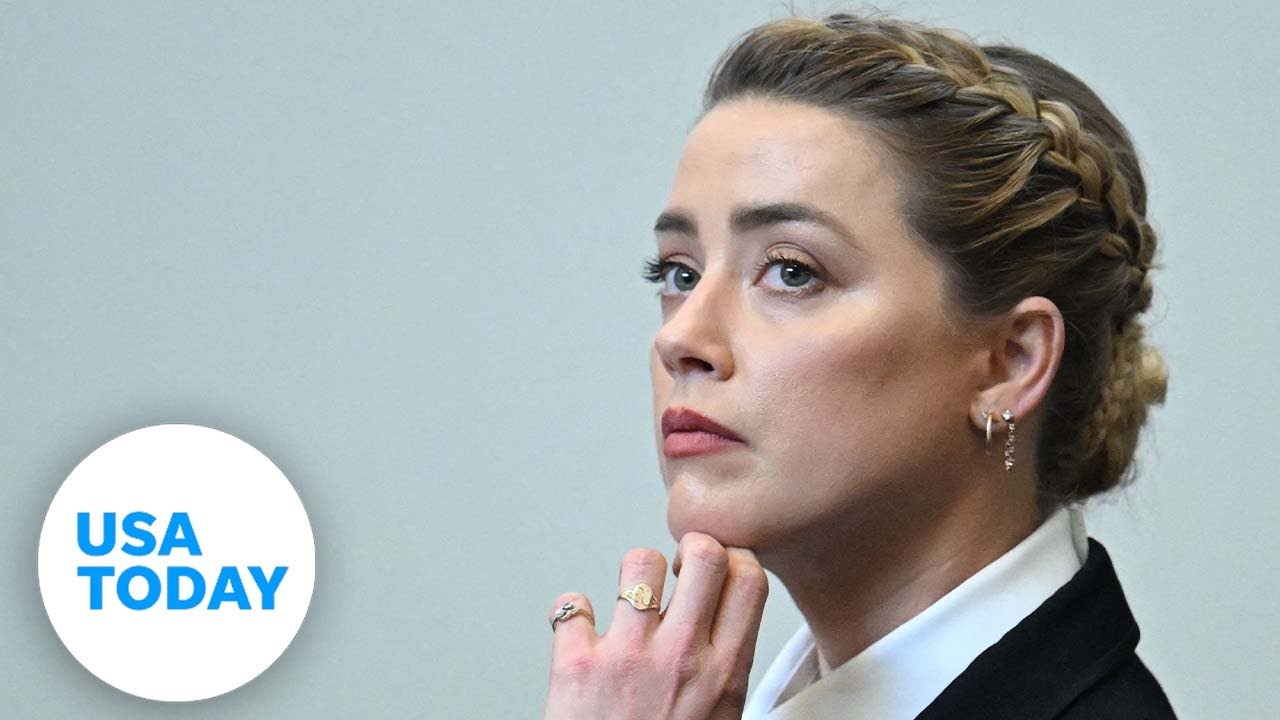 Amber Heard is back on the stand for a second day Thursday as she testifies about her past relationship with her ex-husband Johnny Depp, who filed a libel lawsuit against her.

Depp is suing Heard for libel in Fairfax County Circuit Court, saying her 2018 Washington Post op-ed defamed him when she described herself as “a public figure representing domestic abuse.” The article never mentions Depp by name, but Depp’s lawyers say he was defamed nonetheless because it’s a clear reference to abuse allegations Heard levied in 2016.

At the start of Heard’s testimony Thursday, her attorney Elaine Bredehoft asked her why she decided to take photos of Depp passed out during a trip to the Bahamas in July 2013.

“He wouldn’t either remember or deny it or accuse me of something that happened and it didn’t,” Heard testified, alleging that Depp’s team would take care of him in the midst of substance abuse, but she didn’t feel supported .

More:How Roe v. Wade, the Met Gala and Amber Heard show us the state of women in America

Prior to the Bahamas trip, she claimed, “He had a stint of sobriety before this and it started to change with his friend Paul Bettany.”

At separate points in her testimony, Heard said Depp accused her of having affairs with actors James Franco and Depp’s former “Fantastic Beasts” co-star Eddie Redmayne.

Heard appeared in the 2015 film “The Danish Girl,” which starred Redmayne. She was filming in London, while Depp was filming another project in Australia.

“We communicated and it was positive until it started to change. I got the sense that he thought I was sleeping with the director and then it was with the actor I was filming with,” Heard said, clarifying Redmayne was the actor in question.

Heard claimed earlier that throughout their relationship she had to “bargain” with Depp about taking on certain roles due to his jealousy.

Heard said Depp got aggressive when she began filming “The Adderall Diaries” with James Franco in 2014. “He hated James Franco and was already accusing me of having a relationship with him in the past because we already did ‘Pineapple Express’ together,” she said.

The actress recalled fighting with Depp over the phone since she was filming in New York and he was filming a project in Washington state. The two would meet in person on a private plane to go to a birthday party for Lily-Rose.

On the plane, Heard said she was attacked in front of his staff.

“It went from asking me about how the kissing scene went or how the sex scene went to asking me what James Franco had done in the scene and being really explicit about my body,” she said, noting that she was “embarrassed” because the conversation was occurring around his team.

Heard cried during testimony as she alleged Depp became furious and threw ice cubes and utensils at her, kicked her in the back, and hit her in the face.

“Nobody said anything, nobody did anything,” she recalled. “I felt so embarrassed that he could kick me to the ground in front of people.”

Depp, who testified earlier in the trial, described the incident differently. He denied that he’d drank excessively before getting on the plane, and said Heard initiated an argument and pursued him until he felt compelled to hide in a bathroom.

But jurors heard a recording Heard made toward the end of the incident, in which it sounds like Depp is howling and babbling incoherently. And the jury has seen a text message Depp sent Bettany shortly after the flight, in which he says he’s going to “properly stop the booze thing” because the flight got “ugly.” He also texted Bettany saying, “I’m admittedly too f—— in the head to spray my rage at the one I love for little reason as well.”

Heard broke up with Depp shortly after Lily-Rose’s birthday. They later got back together after he promised he would get sober, she said.

Following a lunch break, Heard recalled an incident that she said turned violent in a Tokyo hotel room in January of 2015, while Depp was promoting his film “Mortdecai.”

Heard claimed Depp hit her in the back of the head and wrestled her down to the floor, which she said “wasn’t a fair shot” because she had been walking away and couldn’t properly defend herself.

“He was screaming at me that he hated me he didn’t want to marry me it was over,” Heard said. “That it was a mistake and everyone hated me. I remember crying on the floor. … It broke my heart. I wanted to marry him so bad.”

Heard said she was worried about bruises showing in her red carpet photos afterward.

Heard’s attorney asked her to recall her time in London with Depp who was doing a press tour for “Lone Ranger” in July 2013. Depp’s children, Lily-Rose Depp and Jack, were also with the couple.

“Johnny screamed at me in the hotel room and all I could think about was the kids were in an adjoining room. What if they could hear us?” Heard recalled. “I had just met them and I didn’t want them to think poorly of me and hate me not knowing what was going on behind doors.”

Depp proposed to Heard in December 2013 in London when she was filming “London Fields,” Heard said.

“He promised me that every day when I would wake up he would make me smile at least once,” Heard recalled. “I was so in love… I can’t describe that kind of joy.”

She said Depp’s jealousy heightened following their engagement. He had proposed an ultimatum when it came to one role, Heard said.

Jurors saw a text sent from Depp to Heard that read: “You want me to roll the dice??? This sounds more like an aggravated ultimatum than the soft words that could help make us both feel better!!! Don’t test me, please…”

Amber Heard claims Johnny Depp did drugs with her father

Heard recalled having an engagement party with Depp, which they had planned to be bigger than their wedding.

During the event, she claimed Depp snuck off and she found him “sharing drugs with my dad (David Heard).”

“My dad at the time was addicted to the same thing Johnny was… They needed more of course and had to leave the party,” she said.

During the actress’ testimony, she recalled several instances of jealousy from Depp. One of the instances that she said escalated was following the Met Gala in May 2014 where Heard, who identifies as bisexual, said Depp accused her of flirting with another woman.

When they returned to their hotel, Heard testified, “Johnny shoves me and grabs me by the collarbone area.”

“He threw a bottle at me. It missed me, but it hit the chandelier … At some point, he just whacked me in the face,” Heard said of the incident. “I was unsure what that feeling was but I suspected I had a broken nose. And other than that I remember my nose being swollen in discolored.”

After Depp vowed to stay sober, he began a total detox in the Bahamas in August 2014 with the assistance of Dr. David Kipper and nurse Debbie Lloyd, Heard said.

“It was okay at first,” Heard recalled. She later claimed Depp had a range of extreme moods throughout their stay including “bursts into anger.”

The actress alleged her ex-husband slapped her and yelled at her for embarrassing him.

“I felt bad. I still felt bad,” she said. “I didn’t know how to detox someone. I shouldn’t have been there… It was hell.”

Depp previously testified that at one point Heard allegedly denied giving him medication that would help him with withdrawal symptoms because it was earlier than the time they were supposed to be administered.

“It feels like the inside of you is trying to escape the body, so it’s obviously very painful,” Depp said.

A fight resulted in the couple returning to Los Angeles where he opted to detox alone and without the aid of medications, he testified.

During Heard’s first day of testimony Wednesday, she recounted the first time Depp allegedly hit her, telling the jury, “It changed my life.”

As Heard continued her testimony, she alleged a pattern of Depp abusing alcohol and cocaine, displaying erratic behavior including holding his dog out the window of a moving car and accusing Heard of an affair she says she didn’t have, and Depp physically and sexually abusing her on multiple occasions.

In Depp’s earlier testimony, he also detailed a fraught relationship with Heard, saying she abused him. He also denied physically abusing her, telling the courtroom, “I never struck Ms. Heard in any way.”

Depp argued that he would remove himself from the room during fights with Heard to avoid escalation. Citing an incident in which Heard allegedly severed the tip of Depp’s finger, he told the courtroom, “I would try to get away so that nothing escalated because if given the chance to allow things to escalate, Ms. Heard would take it to the very extreme, which ended up with my finger being chopped off.”

“The only person I ever abused in my life is myself,” he added, referring to his struggle with substance abuse.

The trial has now entered its fourth week. It is expected to last six weeks, with a one-week break beginning May 9 and resuming May 16.