It’s been a brutal year so far for Wall Street — the Dow has dropped for seven weeks straight in its worst performance since 2001 — and most media companies have been harder hit than the broader financial markets amid ongoing gyrations.

The stock volatility has been triggered by a range of troubling indicators, including higher interest rates aimed at dousing rising inflation as well as supply-chain disruptions, labor shortages and geopolitical uncertainty due to Russia’s war in Ukraine.

With players like Netflix, Disney, the newly formed Warner Bros. Discovery and Paramount Global in the thick of the streaming wars, there has been a new post-pandemic reset: Investors are more closely scrutinizing the growth dynamics and economics of video streaming. Hollywood’s conventional wisdom has been that streaming will eat the world. But after Netflix — the canary in the streaming coal mine, as it has the biggest subscriber base — reported a drop in subscribers in the first quarter, Wall Street is wondering if the upside is as big as previously anticipated.

Amid the turmoil, Paramount got a major vote of confidence from Warren Buffett: Shares in the media conglom (formerly known as ViacomCBS) shot up 15% on May 17 after the billionaire’s Berkshire Hathaway disclosed that it had amassed more than $2 billion worth of shares in recent months. The Buffett boost reversed the Paramount stock’s losses for the year.

Meanwhile, Twitter’s stock has been whipsawed by the unspooling saga of Elon Musk’s potential takeover. In the latest turn, Musk demanded evidence from the social network to support its claim that less than 5% of its active users are spam bots or fake accounts — threatening that otherwise the $44 billion deal “cannot move forward.” Twitter shares closed at $38.32 a share on May 17, trading 29% below Musk’s previous buyout offer, as investors see a growing chance the deal will fall apart.

Year to date, the sector’s biggest stock market loser is Netflix, once a growth-stock darling where the sky was seemingly the limit. The streamer has lost more than two-thirds of its market value since the beginning of the year — more than $180 billion. 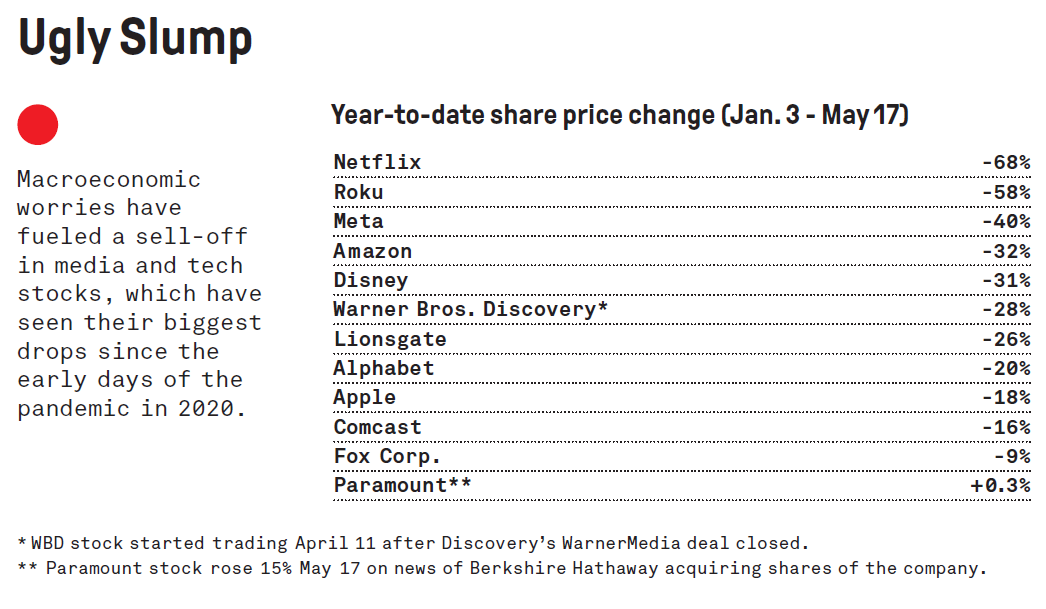 On May 17, Netflix laid off 150 employees, mostly in the US, in a cost-cutting move. In contrast to Netflix’s 200,000-subscriber loss in the quarter, Disney+ topped estimates for user growth, packing on a net 7.9 million in the first three months of 2022. HBO Max and HBO also gained ground (adding 3 million), as did Paramount+ ( 6.8 million).

But are media companies overestimating their streaming services’ earning potential? On Disney’s May 11 earnings call, CEO Bob Chapek reiterated the company’s target of hitting 230 million-260 million customers by September 2024. “We believe Disney+ is one of a kind, a service based on exceptional branded content with wide appeal across all four quadrants. ,” he said. However, financial analyst Michael Nathanson suggests that the company could see more attractive returns on investment if it created a more targeted Disney+ service, geared around core brands like Marvel, Pixar and Lucasfilm, instead of aiming to construct a “super service” to chase Netflix. in general entertainment in markets globally.

“The market is now worried that the combination of [Disney’s 2024] subscriber guidance and rising costs to compete more broadly with non-Disney brands will result in a less impressive business at steady state,” Nathanson wrote in a research note last week.

The content-spending arms race in streaming appears to be continuing, though it may be peaking. In 2021, subscription-based streaming video services worldwide spent nearly $50 billion on content, up 20% year over year, according to researcher Ampere Analysis. Netflix, for one, previously said it expected to spend around $18 billion on content on a cash basis in 2022 (versus $17.7 billion last year). Chief financial officer Spencer Neumann told investors in April that the company would be “smart and prudent in terms of pulling back on some of that spending growth to reflect the realities of the revenue growth of the business.”

As the US streaming market starts to plateau — with mid-80% penetration rates — providers are at an inflection point where they must focus more on retention than on subscriber acquisition, says Kevin Westcott, who leads Deloitte’s US Technology, Media & Telecommunications practice. “There was a race to acquire as many customers as possible. Now they have to figure out how to keep them and monetize what’s out there,” he says.

To reach a broader addressable market, both Netflix and Disney+ have announced plans to roll out lower-cost, ad-supported tiers later in 2022. “The winners in video streaming will be the companies that excel at the hybrid advertising/subscription revenue model, Vollmer says.

Analysts say the macroeconomic storm clouds that have caused stock turbulence this year are likely to continue into the second quarter and potentially into 2023. In a bright spot for companies in live and in-person entertainment, consumers have been flocking to concerts, theme parks and theaters. But for companies that benefited from stay-at-home behavior during COVID, including Netflix and other streamers, “it seems we are seeing a correction from the gains during the pandemic,” says PP Foresight analyst Paolo Pescatore.